Here we will take a look at a very complex Audemars Piguet watch – the minute repeater model. This watch is incredibly clever. But why, in particular, is this watch so special?

It is because, by turning the oscillating system around its axis once a minute, the tourbillon is able to compensate inaccuracies caused by gravity. A sophisticated mechanical system of cams and racks is able to read the current time and then convert it into a sequence that melodically dings hammers to gongs, chiming the current time. Many people – including watchmakers – cannot figure out or even begin to imagine how this thing works, or how it can be fitted and remain so well hidden inside a compact wristwatch case. A lot of effort and thought was put into this watch, and therefore we can call it a smart and complex thing. Indeed, the minute repeater is one of the ‘smartest’, most clever, and most complex devices out there. 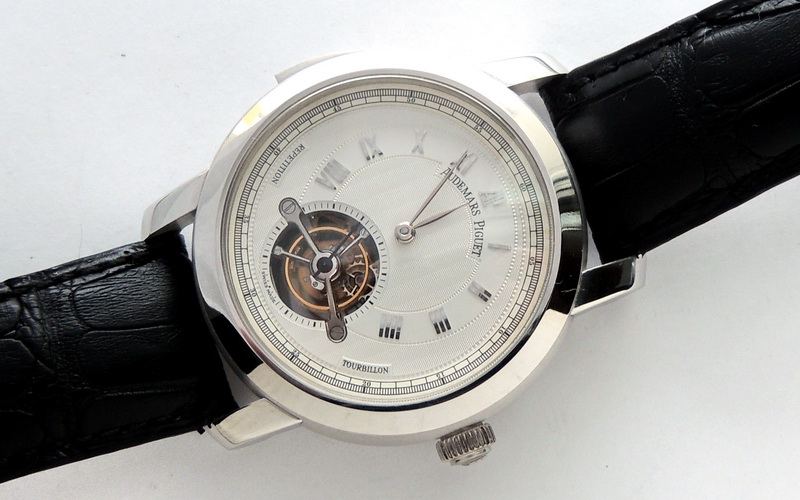 The Swiss company Audemars Piguet is one of the best in the business, and the Audemars Piguet minute repeater is the watch that people dream of owning. This particular timepiece is beautiful and almost perfect, except for one small problem: the watch is a little too small for a male wrist, and so doesn’t have enough weight behind it. Basically, we want the same thing, only bigger. But how do we make it bigger? We could try to make the watch larger by just a few mm here and there, to make it more comfortable to wear. Or is it too complicated to manufacture a larger model of the watch?

The initial aim of the project was to make a fairly small 40mm watch quite a bit bigger. This is quite an undertaking to do, and we want the customer to be comfortable with the cost, as he will need to pay for each extra mm to ensure that he is satisfied with its size, that it properly fits his wrist and that it has a good weight to it.

Introducing the project: Manufacturing a new case for the repeater-tourbillon by Audemars Piguet, for the model Jules Audemars Repetition Minutes Tourbillon. In the following we will briefly look at how the watch is made, at the outcome of the project, and at some of the nuances of the production that we had to bear in mind while manufacturing the wristwatch case. 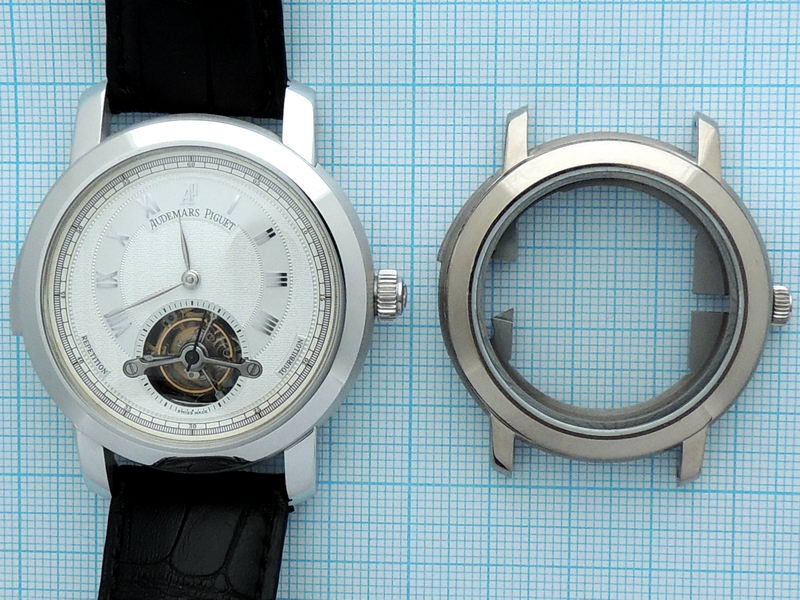 Pictured on the left is the new case, while on the right is the original. At first, there doesn’t appear to be much difference between them, which is good as this is more in keeping with the original Audemars style, while still receiving a significant increase in size. 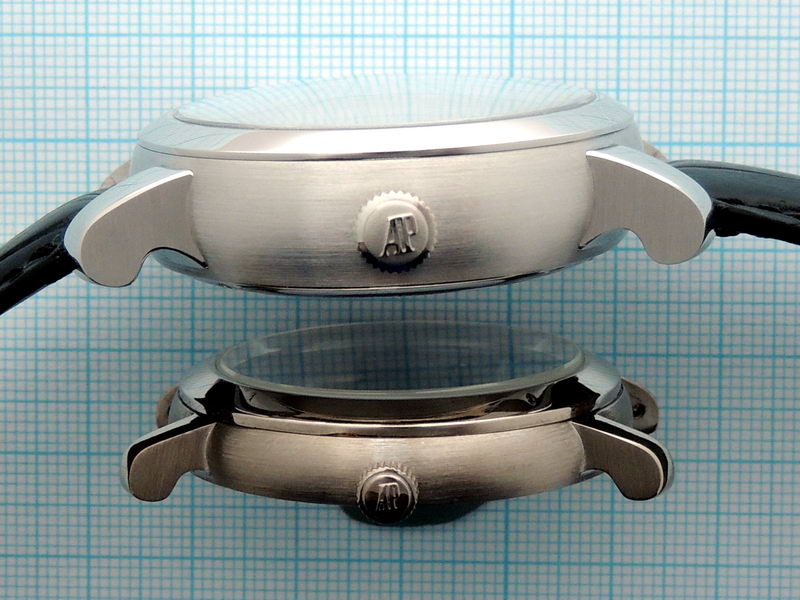 As you can see, the volume and weight of the watch have increased significantly. The diameter of the original case was 40 mm, while the new casing has a diameter of 43.8 mm.

How to Make a Gold Wristwatch Case

First of all, a 3D model was created (CAD model). It represents the watch virtually. This model is then converted for use in a program used by CAM. A set of milling cutters will need to be purchased to design and drill all clamps for every thin piece of the watch case The result will need to be calibrated, and three to five ‘blank’ parts will probably be spoiled before a perfect result is achieved from the machine.

Luckily, while experimenting with developing another case, we created a case for an old Audemars Freres movement. The knowledge of the process and stages that we got from this previous project helped us a lot during this one. However, due to the slight difference in the sizes of the two different movements, we still had to do new tooling work for each part in order for it to fit correctly. This meant that we had to ruin a few testing pieces using cheap metals in order to get the perfect fit for the movement. Only the final take was made in gold. 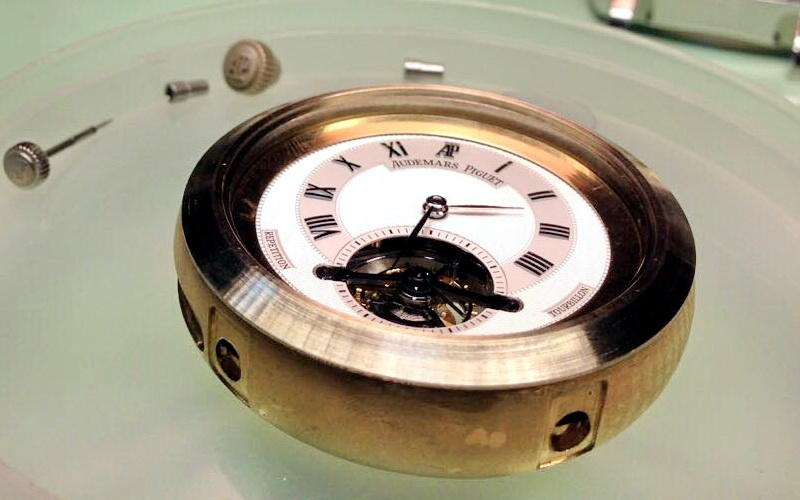 At first, a brass case is made to represent how the movement fits inside the case, and to check the compatibility of all the parts. 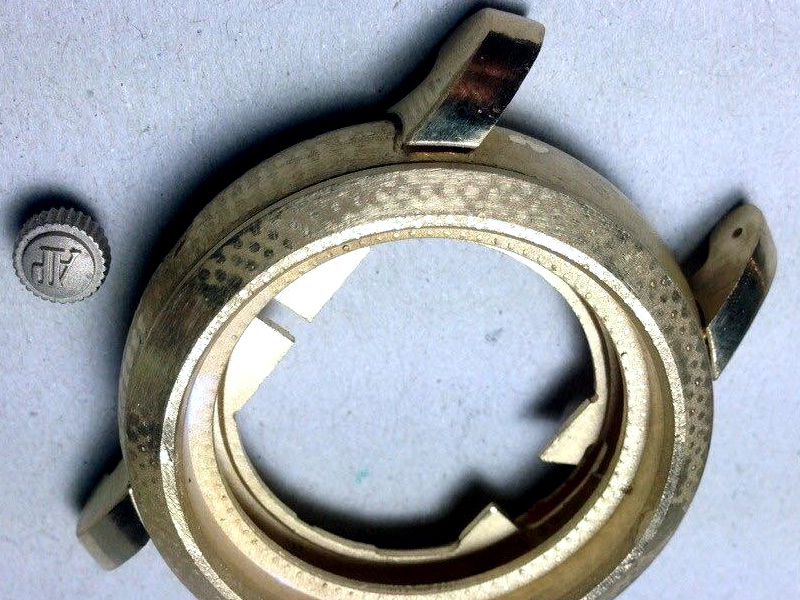 The raw case after a brief polishing, and with the lugs added. 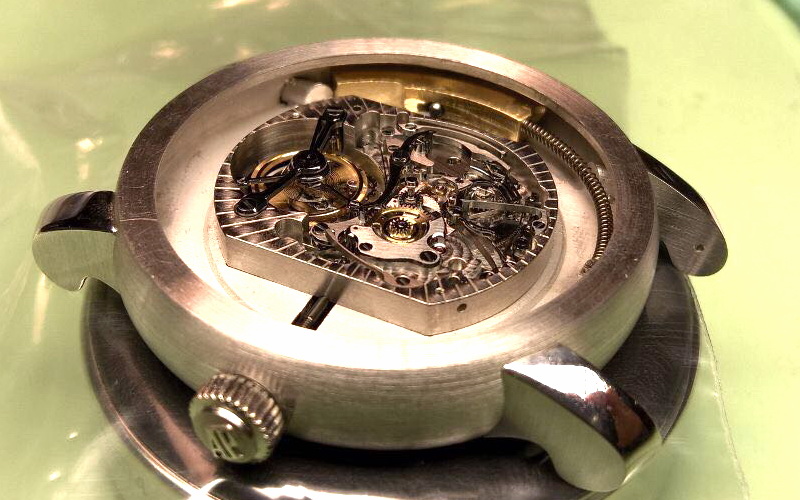 The assembly with the repeater slider, the crown, and the slider adjustment. 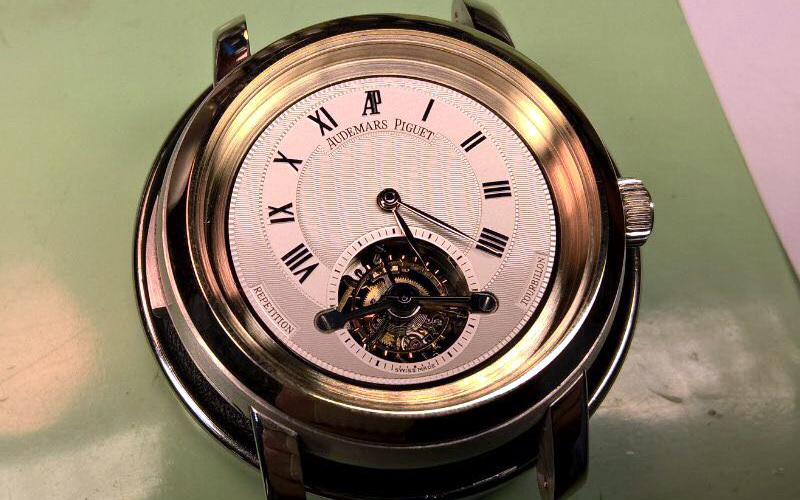 The movement now placed in the new case.

The case is significantly bigger than the original, and now the watch face appears smaller and not quite proportional. This problem can be solved using an extra outer minute track. 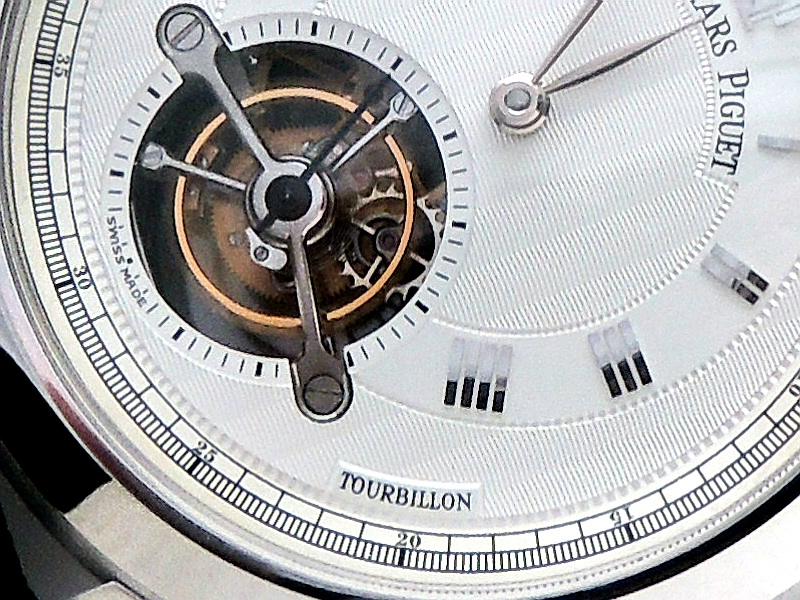 Here, the face is being extended with a ring that contains fine minute track. It doesn’t catch the eye quite as much, but it does add volume to the face, which is what we want. 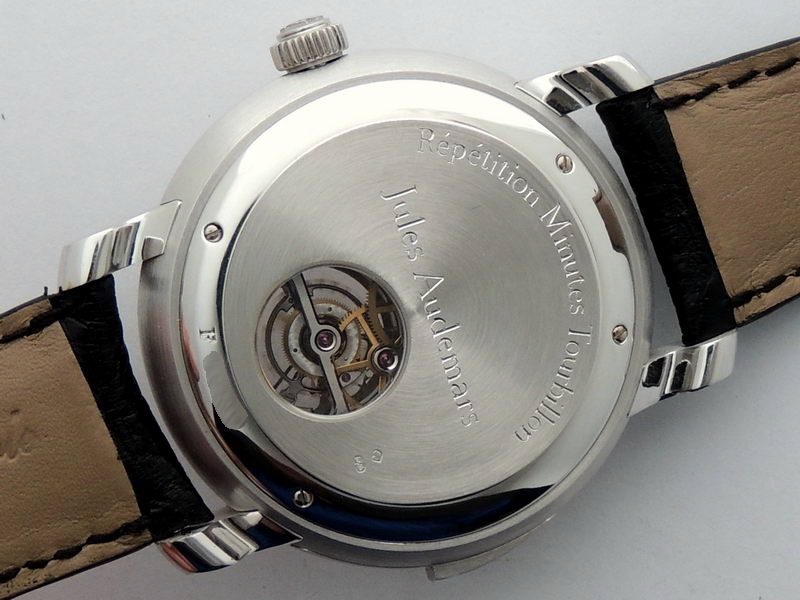 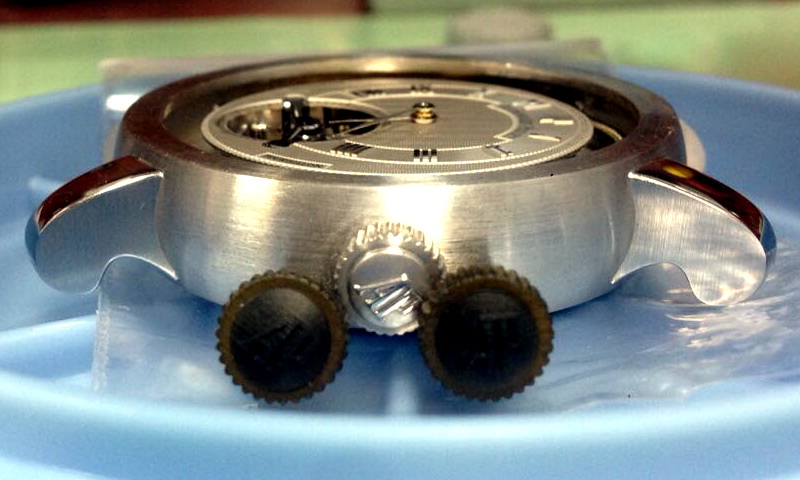 The crown required a few tries, and we needed to make a few plastic models before it was perfect. The computer design seemed to be complete, but the physical model needed a few adjustments. 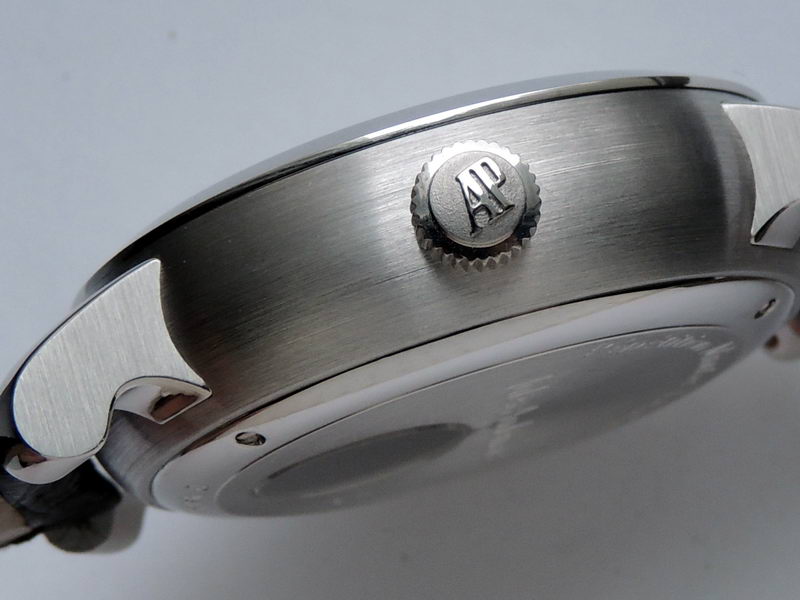 And finally, here we have a one-of-a-kind Audemars Piguet masterpiece, a ‘Piece Unique’ (French) – one unlike any other.

Surface polishing and refinement is quite an important part of the watchmaking process. Many private master jewellers don’t pay enough real attention to polishing and to the development of the surfaces. It is important that one works on the piece in order to imprint the linear pattern and micro-grooves upon it; to show off the shape of the piece, and to make sure that the light plays off it in an attractive way.

The Jules Audemars series has an original and easily recognised method of polishing. In the process of the repairing and polishing of the case, a lot of attention to detail should be paid to the linear side pattern, while frontal surfaces are mirror polished. After this process is complete, the case is covered in rhodium for a solid, bright finish. 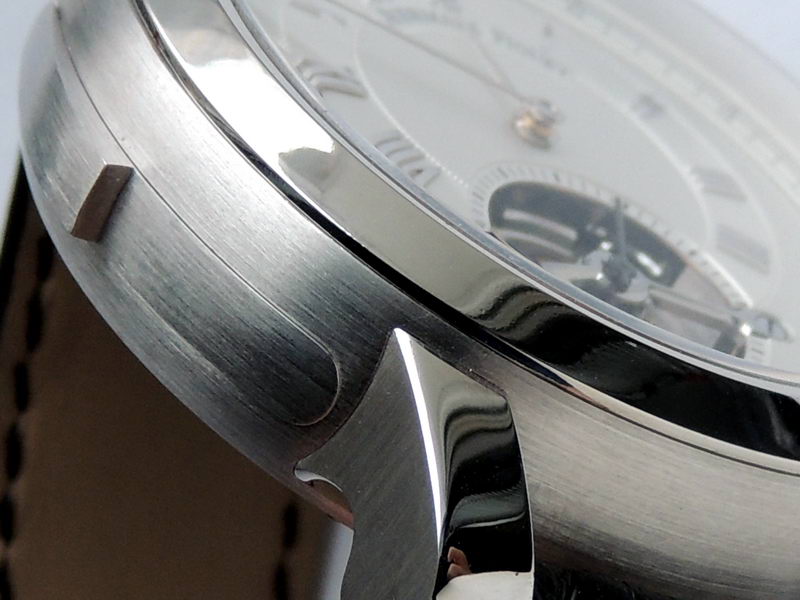 Combining the frontal mirror-smooth surface with the satin finish on the side surfaces. 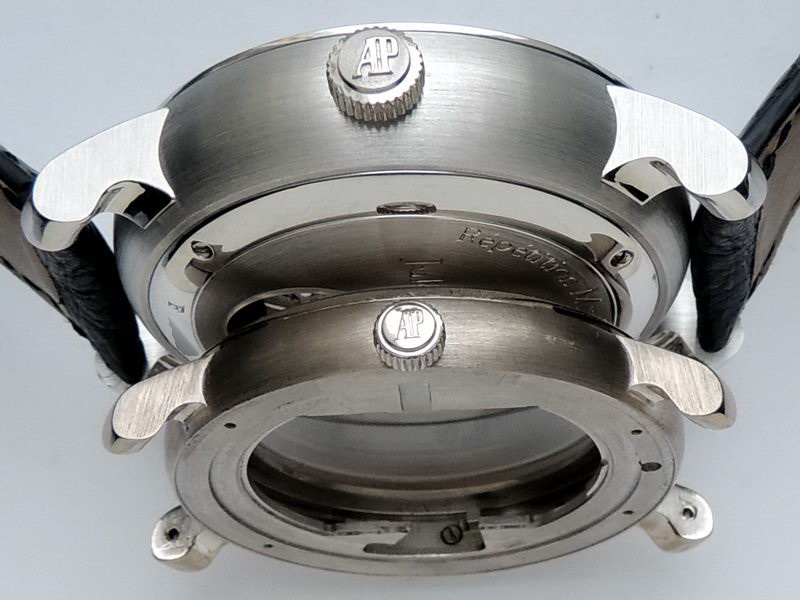 A comparison of the new case to the original one. 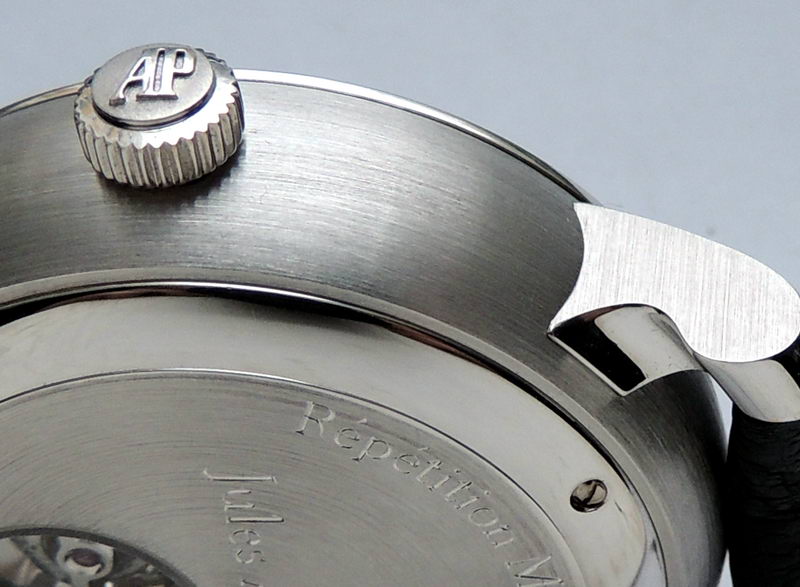 The most difficult part of the polishing process was treating the surface near non-flat areas, as it is very important for the quality to be at least as good as the original piece, if not better.

The process of creating this new case was even harder than it would have been to repair the same mechanism (some stages were not photographed). 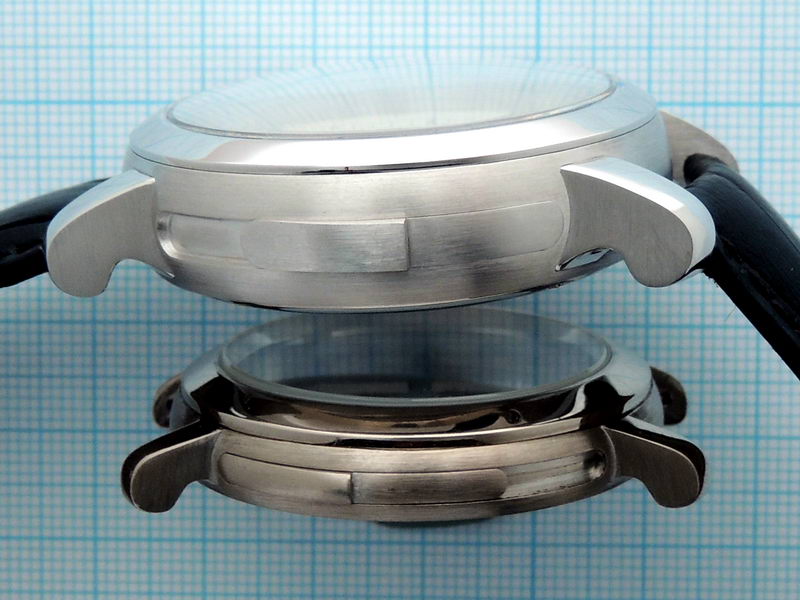 P.S. It is uncertain whether this watch upgrade makes it an ‘elite’ class masterpiece. Although this was not the aim of the project, in this case the watch did belong to a high-class individual. However, the most important thing was that the watch was changed to be more comfortable and wearable, which is something that we can do for your watch, too.